Daniel and Lucas have had a season as ski instructors in Japan with Snowminds, more specifically on the destination Kiroro. Kiroro is located about an hour away from the active volcano Mount Yōtei. Defensive weather condition makes it a challenge to reach the top and have the joy of skiing down in the crater of the volcano. But fortunately (after several attempts) Daniel and Lucas managed to get a ski trip on an active volcano in Japan during their season!

“Mount Yōtei, you won the battle, but not the war!”

“Lucas and I are once again ready to try and reach the top of the active volcano, Mount Yōtei. The last time we tried it didn’t go that well. Despite a brave match from Lucas, Ditlev and I, hard winds and poor visibility prevented us from reaching the top. The volcano is 1878 meters high and active (“sleeping” though), and with the volcanic stones and pure ice on the top it is, a very difficult hike. For this reason, you must be lucky and get the right conditions if you want to be one of the few that reaches the top. And just our luck, Lucas and I, we got lucky and had the right conditions for a ski trip on an active volcano in Japan – no winds, sunny and cloudless”. 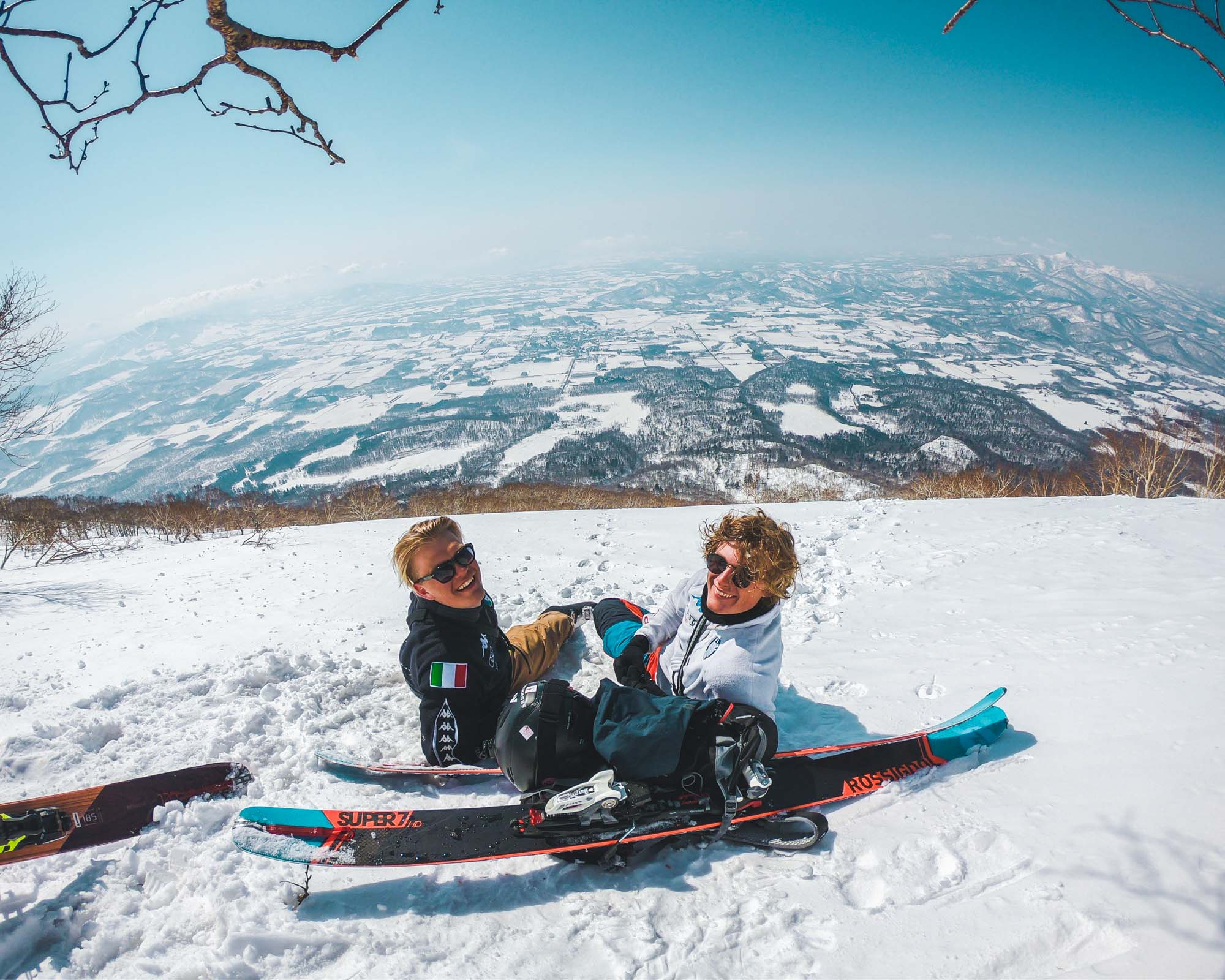 “The whole day just went up in unity, right from our alarm started until we skied into the crater on the volcano. Lucas thought he had set the alarm at 4:30 in the morning (am), but instead he had accidentally put it at 4:30 in the afternoon (pm), which meant we wouldn’t reach the top if we missed the alarm. But magically, I woke up at night/morning and decide to check the clock and what is it? 4:28 am. So already from the morning, we came well from the start. We packed the car in the evening before, so we got up, ate breakfast, and drove around at 5:00 am. At 6:30 am we were ready at the foot of Mount Yōtei, and oh my god where she is beautiful with the east side of the volcano still sharply illuminated by the morning sun.

Slowly our hike begins, soon we have already gone approx. halfway and started to think about having a lunch break. The time is now around 9:00 am, so we have had a good pace the whole morning. In fact, we could have done it faster if we didn’t both stop every four seconds to take a video or a picture – all of which must be documented! And there it was, the perfect place to have lunch. A giant tree is tucked away from the mountain, forming a perfect platform to sit and enjoy the good weather and have lunch. Here we turned off the music and just enjoyed the most perfect lunch I’ve ever had – even though it consisted of snickers and rice lumps ;-).

It was such an amazing feeling sitting in the middle of an active volcano in Japan, where you have hiked up and now can sit and enjoy the view with your best buddy. Soon the trip goes up towards the top, and it only gets harder from here. Gradually there is more and more ice, which means that our skins on our skies have nothing to grasp onto (skins are basically just skins you put under the ski so you don’t slip backwards). No more than approx. 50 meters from where we held lunch, we have to tighten the skis on our backs and go the last half up only in ski boots. From here, the hardest part of the tour begins. The volcano becomes exponentially steeper the closer you get to the top and the terrain becomes harder, so the last part is just a struggle to reach the top, and eventually, you only run on a mixture of willpower and a Snicker every now and then”. 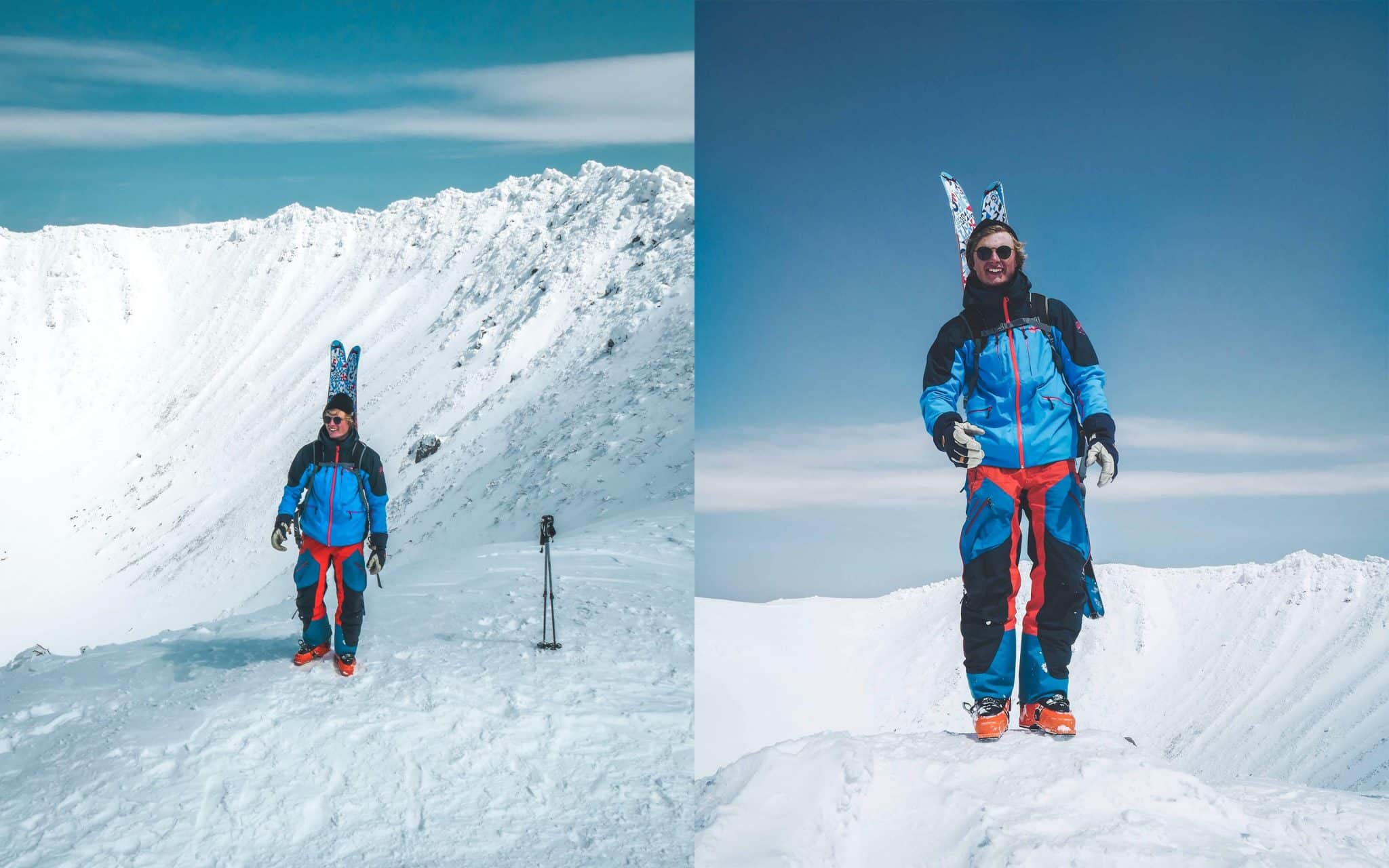 Reached the top of Mount Yōtei!

“But when you are finally, finally reaching the top there is also a feeling without equal. When you round the top and can see the entire crater, the emotions are a great bulb of relief, joy, exhaustion and a good shot of self-confidence. Lucas and I of course just skied down the crater – yes, that’s right, we were skiing down the crater of an active volcano in Japan, how was your Thursday morning? 🙂 When we finally drove down to the car again, the clouds started to roll over us, and when we reached the car you could no longer see the top. We had therefore not reached the top if we had slept over us for just half an hour. And thus, Lucas and I won the war against Mount Yōtei – and it was the best thing we have ever done!”

The spots are quickly filled up on our ski courses and snowboard courses in Japan with an associated job guarantee, so you will be guaranteed a whole winter in the magical Japanese nature! Book your spot here or contact us to hear more!