Welcome to the 4th and last part of my blog! If you have missed blog 1, blog 2 or blog 3, read them first, then everything will be in chronological order :-). In blog 3 you have read about how I went home from Kaprun in the middle of the season and all the highs and lows that come with doing a season. In this last blog, I watch the days fly by as spring is coming closer. Enjoy reading!

Coming back on the highlights of the season, I forgot a very important one! The Hütten Rally in Kaprun. Together with all ski instructors from all ski schools, we took the last lift up the Maiskogel. From the top, we went down from hut to hut, to drink a beer or schnapps everywhere. We stayed at the first cabin for a while, because it snowed wet snow and no one wanted to ski through it. Someone had brought his guitar and it quickly became cosy and so we sat a little while before heading further. Once it was quite dark we decided to go outside to take a group photo. The wet snow had become good powder snow in the time we were inside and we couldn’t wait to go down. It was a true spectacle: dozens of teachers screaming and howling through the powder snow in the dark. A night to remember!

The days of teaching were slowly coming to an end and I tried to take it all in. From early in the morning until late in the evening. The breakfasts with my colleagues, the après ski afternoons, the schnitzels (which I didn’t eat, because I am a vegetarian, but it looked nice) and life in a ski instructor’s house. My last week in the ski school would be at the end of March, after that, I would stay another week in Kaprun and enjoy a week of holiday. My father and best friend picked me up and together we would drive back home. Flying back was not a possibility; I had way too much luggage. 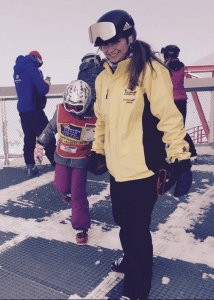 Note to all new instructors: you are not going to wear different clothing than your ski underwear and relaxing outfit. You, therefore, do not need many fancy dresses or three-piece costumes. Believe me.

That last week of holiday was incredibly fun and needed. My best friend had never skied before, so I could test my teaching skills on her. At the end of the week, she could comfortably ski blue slopes so mission accomplished. I gave her my ski’s to use for the week because I had seen a super nice, more challenging pair of skis on sale that I planned on buying.

So the next day I went up the mountain with beautiful new Fischer skis. They were a lot stiffer and longer than the previous skis and the radius was also a bit higher. The perfect ski to do the Landes 1 with (equivalent to a level 2 or easy level 3), according to the seller. And then it kind of dawned on me. Ending the season with the Landes 1 would be a nice way to end.

So that’s why I signed up for the Landes and had to go back to Kaprun in late April. Between my vacation and the Landes 1 was able to go home to bring home the absurd abundance of clothing and almost right after I was already on the train back to Kaprun.

I was able to stay in the house I had stayed in all season and that saved a lot of money. I also did the Landes 1 together with my roommates Maggie and Marlous. We had a lot of fun!

In between me being in Kaprun in March and me coming back in late April, spring had set in the valley. All of a sudden it was really warm and all the snow had melted. Fortunately, there was enough snow still on the glacier otherwise we would’ve had a problem. So up we went, on our flip-flops in the gondola to the top, where we would switch to our ski boots. 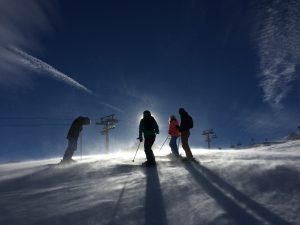 The first day of the Landes 1 was tough. Correction: the entire Landes was tough, but the first day hit like a truck. As a first assignment we all needed to show some skiing, short turns down the red slope, so all the trainers could estimate who should go in which group. That was a little nerve-wracking, having about 100 people looking and judging your skiing. Also, I was placed in the lowest group. I tried not to let it bring me down haha. Even though I had only learned how to ski the few months prior and my odds weren’t the best, I was very determined to make it.

Landes 1 is completely different than the Anwärter (level 1). During the Anwärter you mainly focus on learning about teaching and basic skiing, with the Landes you mainly focus on your abilities and faster skiing. It is really about showing that you know what you are doing and that you are in charge of your skis and the terrain and not the other way around. Especially the part about you being in control was still quite new to me.

During Landes 1, you have to do a combination of theory, practical and teaching exams. The theory and teaching exams are quite similar to the Anwärter, but the practical exams mostly consist of moguls, dynamic short turns and dynamic long turns. This can also be on off-piste terrain, depending on the conditions.

It was during the Landes 1 that I skied moguls for the first time because that is something that I normally prefer to avoid. Also, off-piste skiing is not my thing and although I like it, I find it difficult. The level was high, but I felt improvement every day. I became more and more confident about my skiing, but deep down I knew it wasn’t enough to finish the Landes with positive grades. But you won’t amount to anything with that spirit so I kept going.

The days before the exams I became very nervous. During the Anwärter I was also quite nervous, but back then I was still positive that I would make it. Unfortunately, this was not the case during the Landes 1 and no matter how well I tried to push that nervous feeling away, I just simply couldn’t.

On the exam, I felt… well, you can kinda imagine how I felt haha. And mainly because we started with the dynamic short turns run… Oh well, let’s get over the worst part first right? Against all odds, I performed better than expected. It used to be my worst nightmare, but I scored a positive grade on that. The next run was dynamic long turns and from the first turn on I already knew that I was too slow. I could not get my grip enough and the results were way too long, barely carved turns. Lastly, we did moguls and like I expected they didn’t magically go much. You can kind of guess what my results were I think. Negative. Unfortunately.

Of course, I was very disappointed, but I learned so much and I had found a new love for skiing. I had a new goal in mind: Train super hard, get better and do the retake the following season!

Side note: Between you and me, I did pass the Landes 1 on the retake 😉

Thank you for reading through my 4 blogs. Hope you enjoyed them!